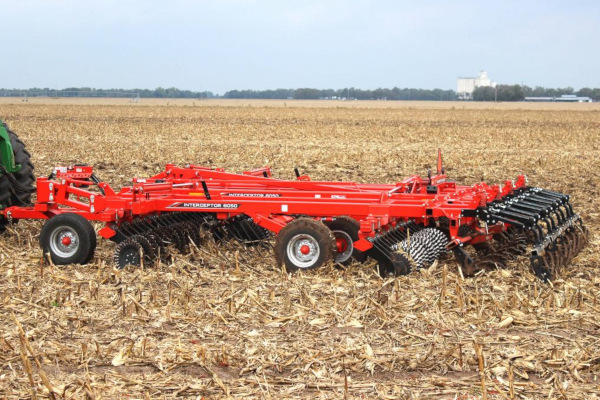 Fields with asterisks* are required. Please email our helpful staff with any questions or comments using the contact form.

Send to a friend »

Send To A Friend

Fields with asterisks* are required. Your friend will receive an email that contains a reference to this page. Please send this email only to people you know who would be interested in this information.

This critical component also assists in providing an even, worked surface for planter row units to place seeds consistently in the seed zone. Star Wheel™ gangs are spring cushioned to contour over varying field conditions, provide a consistent finish, and evenly distribute residue across the soil surface.

The 24/7 reel also has the ability to ‘float’ with a simple in-field adjustment, allowing continued operation in wetter soil moisture conditions.

Guardian Hitch – This exclusive option for 8050-30 guards against stress on the implement tongue weldment and frame.

Constant Flow, Hydraulic Wing Down Pressure – Standard on all Interceptor® 8050 models, this feature can add up to 500 pounds of downforce per wing via the wing fold cylinders. This feature also contributes to an even depth of cut and positive residue cutting action across the full width of the Interceptor 8050, especially at a shallower depth of operation.

Star WheelTM Hydraulics – Constant flow, hydraulic down pressure on the Star Wheel treader allows the attachment to maintain even working pressure across a varying field surface, resulting in a consistent, uniform finish.

Let us help you get moving.